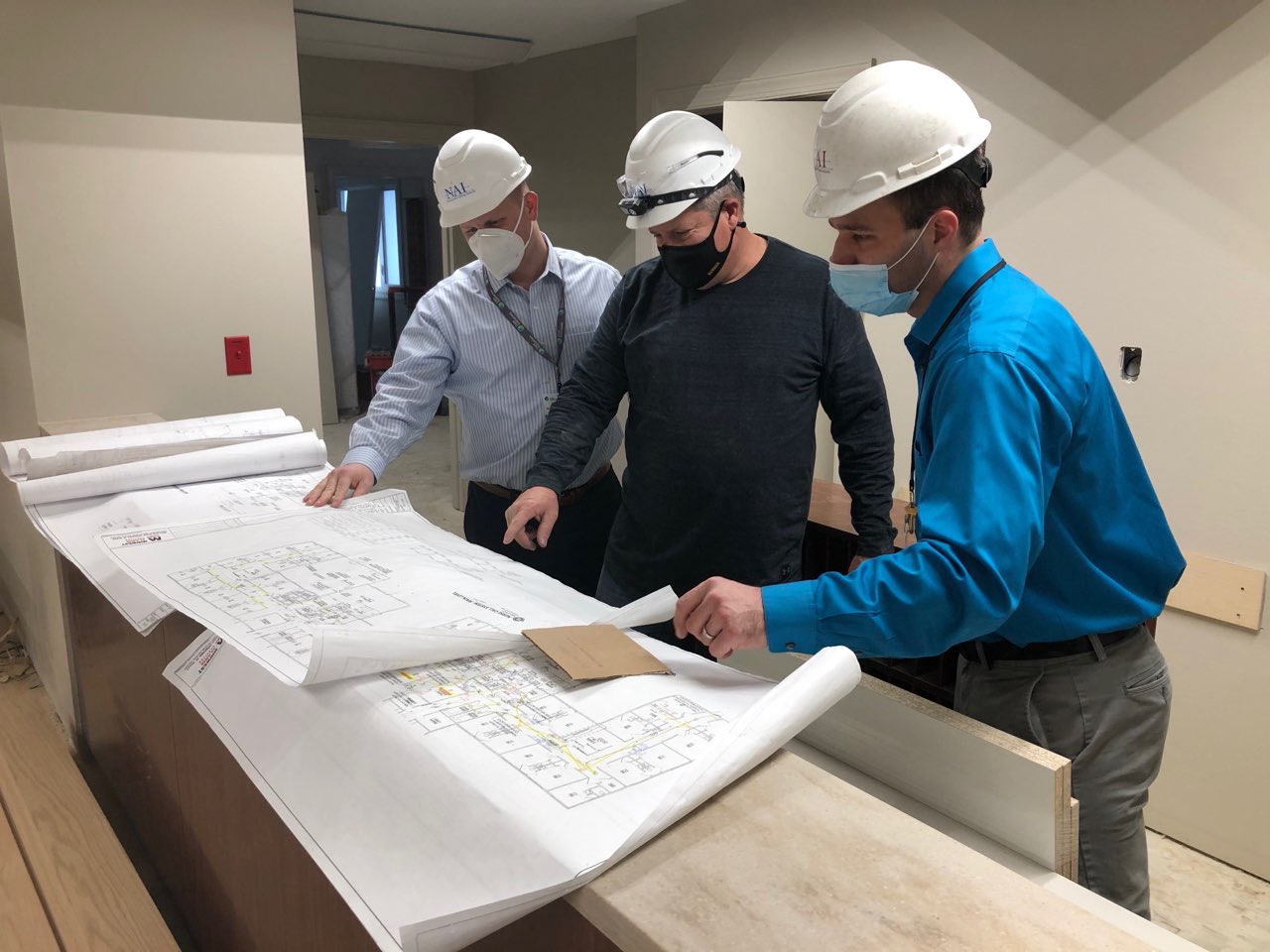 (CEDAR RAPIDS, February, 2021) On Aug. 10, 2020 the staff at Heritage Specialty Care were tasked with a major challenge when the derecho ripped through Cedar Rapids taking out the skilled nursing facility’s roof and other structural damage to one wing. As the storm raged on, the staff worked as a team to get residents to safety and settled in other rooms away from the powerful winds.

Now, after months of working with Austin Builders, the new memory care wing is set for a grand re-opening on Tuesday, Feb. 23 and the public is invited to come for a tour before residents move back into their rooms on Wednesday, Feb. 24. And there is a rainbow where destruction once loomed.

The Day of the Storm

The August 10th derecho arrived at noon and lasted almost an hour with extreme winds with some gusts over 140 miles per hour.  “It was a frightening experience,” said Administrator Nick Jedlicka. “Trees were getting uprooted and thrown through the air. Station 2, the southwest portion of our building, took the brunt of the damage.”

“There were 26 residents living in the affected section of the building when the storm hit,” Jedlicka said. “They were evacuated to another part of the building during the storm.  It took extraordinary efforts by our staff to keep the residents safe. Fortunately, no one was injured.”

Winds snapped support posts underneath the porch connected to Station 2. When the porch collapsed it severed a fire sprinkler pipe, causing a geyser of water to start flowing into the ceiling above the dining room.

“A ten foot by twenty foot section of ceiling eventually caved in and there was 2-4 inches of standing water in the dining room and hallways,” Jedlicka recalls. “Large portions of shingles and roof underlayment were ripped away from the building and scattered all over our property and adjoining neighborhood.”

“The entire building had roof damage,” Jedlicka said. “Trees and debris were everywhere after the storm and power poles were down everywhere.”

However there is one very visible difference. “We incorporated a lot of color therapy,” Jedlicka said.

The concept was introduced by Care Initiatives’ Vice President of Clinical Services Johanna Volm, RN, BSN. With assistance from Eastern Iowa Regional Business Director Tesha Rainey who helped research the concept about how color can create a more peaceful, conductive environment for those with memory impairment.

The team was assisted by designer Sarah House of with Pagenkopf Sales Associates, in collaboration with Saxton. “There were already green accent walls in the rooms which is wonderful because green is the last color we can see when we have dementia,” Rainey said.

“Blues and greens were highly recommended.  And pops of red in the dining room in the floral artwork on the walls as it is shown to stimulate appetite,” Rainey said. “We avoided any yellows as it is associated with increased incidents of aggression.”

“Additionally, we’ve started a new educational partnership with the Iowa Chapter of the Alzheimer’s Association for daily programming and staff training,” Rainey said

Thirty-minute tours are available to the public on Tuesday, Feb. 23 from 1-4:30 pm. Those wishing to attend should call 319.396.7171 to RSVP for 30 minute tours. All in attendance will be screened for COVID-19 and required to wear a mask. Parking is available in the south parking lot.